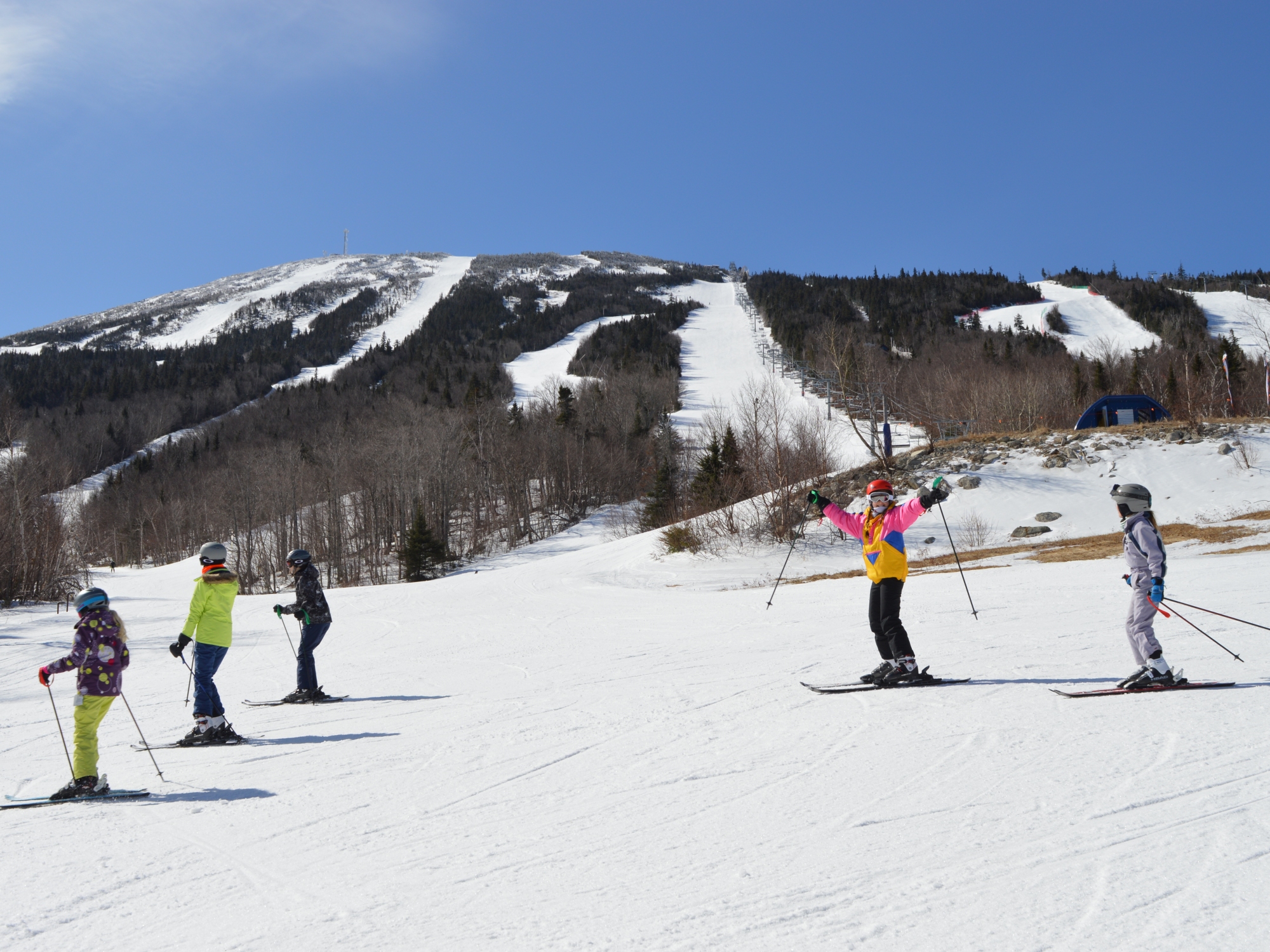 On Monday 28th March 47 staff and students promptly arrived at Heathrow Airport Terminal 5. We were enthusiastic, a bit nervous but ultimately quite excited. Some however, were unbelievably excited (it was Grace M’s birthday!). Our journey was tiring as we were delayed due to storm Katie which had caused havoc across the British Isles. Thankfully the airline provided us with some food vouchers so we could stock up on some much-needed breakfast.

Once again, we were thoroughly spoiled by the mountain resort: glorious sunshine, perfectly groomed trails and fun instructors that made the week so enjoyable. Those that are seasoned ski trippers were thrilled to see their instructors from last year. Scott once again took charge of the advanced group and Mad Mike made an appearance within the week. There were some new faces in the instructing staff; Blaine and Clark took charge of the beginners and did a sterling job. Gary took one of the intermediate groups and who can forget Kevin who took the other group! We were very lucky to only have to share the slopes for 2 out of the 5 days of skiing, this meant more ski time and an opportunity to take over the resort. 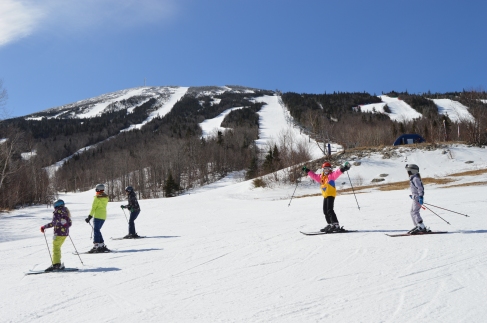 As the week progressed it was fantastic to see the beginner group making great improvement, consequently making it from the top of the piste to the bottom competently. The intermediates took great confidence from the wide, perfectly groomed trails and enjoyed many good runs across their favoured ‘Tote Road’ and ‘Kings Landing’ trails. The advanced group once again showed us how it was done and used the icy conditions to develop their ski prowess on the slopes. We had glowing reports from the instructors as to how wonderful the girls were. Clark was particularly complementary about his group and said that they were ‘wonderfully well mannered young ladies’. 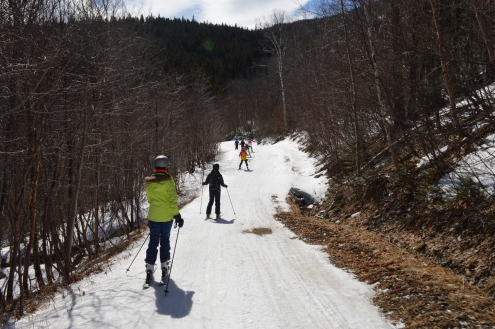 In the evenings we were kept occupied through participating in a range of different activities. We went bowling, watched a movie and played a range of sports including trampolining, climbing, wallyball, racquetball, swimming and basketball at the Sports Centre and at the Anti-Gravity centre. On the last night we went on a CAT ride up the mountain, those of us in the first CAT were able to get out at the peak of the mountain and brave the elements (for about 30s before we got too cold and had to return to the warmth of the vehicle!). 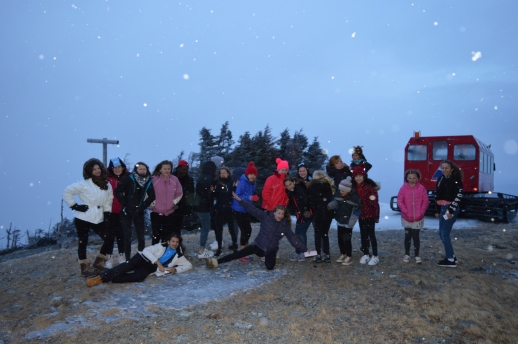 Our stopover this year was in Boston. While some students had been before we made sure that we visited new places and tried new activities. Our first stop was to the Kittery Outlet Mall for some bargain shopping. The Nike store was a popular stopping point; a good proportion of our spending money seemed to disappear there. We arrived in Boston to flurries of snow and the forecast of more snow to land over the next 24 hours. Our hotel was fabulous, it was the Hilton in Cambridge, MA. The hotel had see through lifts that kept the girls entertained for the first 20 minutes as they went up, and down, and up, and down again! Once the lift excitement was over we boarded the bus again and went downtown for some more shopping, this time at the Cambridge Mall which had an array of high street shops before heading to La Famiglia Giorgios for a family style Italian dinner which provided us with enough food to feed the whole of Boston. Thankfully our hotel had a swimming pool so we were able to go and burn off some calories after dinner – they also had a hot tub, which was more favourable for the older students!

The final day of the trip was spent viewing Boston from all angles. After a (rather large) breakfast at Uno’s we went up the Skywalk Observatory Tower to view Boston from above. It was a fascinating experience and had excellent resources for us to learn about the city of Boston, it’s history and to point out some major landmarks. Back on foot again we hopped back on the bus and were treated to a historical tour of Boston from Miss Brown the tour guide. It was our intention to walk the Freedom Trail, visit the sites and learn about the Boston Tea Party and the American Revolution but the weather wasn’t co-operating and we had to resort to a bus tour. Thankfully, due to Miss Brown’s quick thinking and a handy tour guidebook she was able to guide us the city via bus! Our bus tour finished at Faneuil Hall which is a festival marketplace with shops and the world famous Quincy Market that houses a fabulous choice of cuisines. We spent a couple of hours touring the area, eating lunch and relaxing before we boarded the bus again for our final stop, Fenway Park, home of the Boston Red Sox. While in Faneuil Hall we were provided with free Red Sox hats, which came in rather handy on the tour and showed our support for the team. The tour was insightful and gave us a unique opportunity to develop our knowledge of baseball and the historic nature of the stadium. 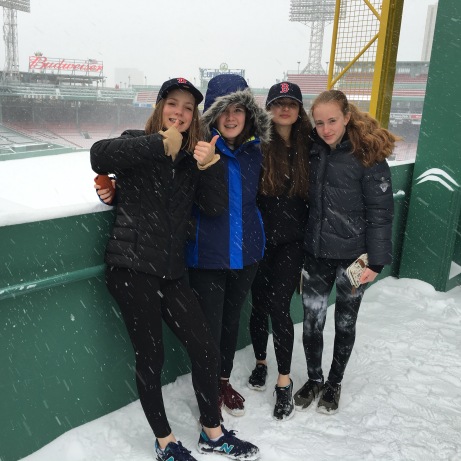 Finally, we hopped back on to the coach again to head to Logan Airport for our (delayed) flight back to Heathrow.

Awards from the week:

What a thoroughly enjoyable 9-day trip we had. Time to plan next year’s trip – a change of location this time, West Coast America! 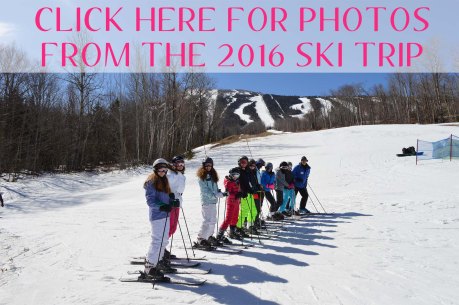 One thought on “Ski Trip 2016 to Sugarloaf Mountain Resort, Maine and Boston”