This week has had us thinking about ‘Wellbeing’. In Monday’s assembly the staff reminded us about healthy eating and daily exercise and demonstrated some of the ‘diets’, which we can often get sucked into. I had never heard of the lemon juice and chilli diet! Brahim has been serving up a hearty breakfast every morning and a bowl of porridge has been the best way to start off these cold mornings. Lunchtime activities were centered around ‘Wellbeing’ with lying down club, mindfulness colouring, fresh air and talks from experts on skin care and dental hygiene. The older girls listened to a talk from the Teenage Cancer Trust. With 7 young people in the UK being diagnosed with cancer every day it was important for the girls to be made aware of the main warning signs of cancer in teenagers and young adults. Mr Keeley, Miss Brown, Margot and Tala finished off the week with an informative assembly on the importance of sleep. 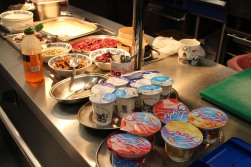 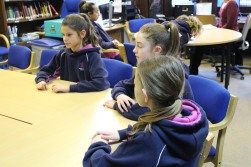 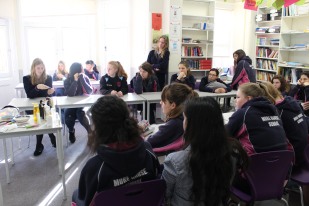 Year 8 have been studying the anatomy of the ‘Digestive System’ as a part of their Science course, so off they went to the Hunterian museum where the girls had the opportunity to see soft tissue specimens of various animal body parts. The girls produced some fantastic anatomical drawings, which brought their studies to life.

Walsingham House Captain, Ines, presented the Convent of the Assumption, in Kensington £100 which was raised by the House from their charity events. Well done to all those in Walsingham who have taken part in supporting the work of the sisters. The fruits of their labour: bake sales and singalong to a Sound of Music has meant our House captain, Ines has amassed a tidy sum!

The monies raised will go to help with social work and education both in the UK and overseas.

Sister Cathy has visited the school several times, giving a talk to Walsingham about her work and vocation as well as popping into our Christmas fair. Their map indicates how global and far reaching their work is. The convent was interested to meet and visit the school especially as they arrange overseas work experience in their schools and orphanages for older students. Watch this space!

The Drama Department were thrilled with their Year 10’s first scripted assessment. Mrs Taylor and Miss Jackson’s groups took a selection of monologues and scenes from ‘A Midsummer Night’s Dream’ by Shakespeare. Their interpretations and characterisation skills were extremely impressive and the girls felt enlightened and relieved to have completed this assessment. We wish them all congratulations on their hard work and professionalism and we look forward to seeing their work on Devising Theatre.

It’s been another busy week for the PE department. There was a narrow loss for the All Stars Netball 3-2 vs Kensington Aldridge Academy, but Miss Minto was very impressed with the team spirit and effort by the girls who played as they have greatly improved this year. Our Player of Match was Scarlett.

We had a win in the U14 Netball vs Kensington Aldridge Academy, 11-1, and saw some excellent examples of bringing the ball from defence to attack.

Our first hockey fixture of the term resulted in a win for the U13’s vs Francis Holland Sloane Square. There was some excellent goalkeeping by Emilia and great goals scored by Demi. Our Player of the Match was Demi – congratulations to her.

Year 8 have had a big week in competitions – the Borough Indoor Athletics Competition and the Indoor Cricket Regional Competition. There were fantastic performances from both teams. Special mentions go to Yasmine H, Niamh and Phoenix for winning their events in the Athletics Competition. The cricket was also a fantastic day as the girls were on a high from becoming Borough Champions before Christmas. This was the next stage in the competition and they were up against some tough opponents from other area championships. After three hard games with big batting scores from Paula, fantastic run outs by Cece and Amalia and incredible bowling by Millie C, the girls didn’t quite make it through to the national round. However, a fantastic effort from Year 8 this week – well done!

Eleanor in Year 7 continues to excel in her fencing and has successfully defended her No 1 rank Under 11 in Great Britain (she has held this title since 2014) She is also ranked 23rd in the European Fencing Championship Under 14 series and to cap her 2016 season she is ranked 17th in the Leon Paul Junior Series Under 15. We wish her all the best for this weekend where she is off to Budapest for another tournament at U13 and U15 level. Eleanor has also encouraged other girls to join her sport and we now have a More House Fencing Team who will be competing in 5 weeks time at the British School Team Championships. Good luck girls! 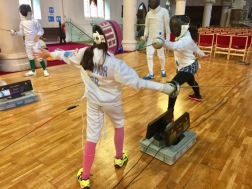 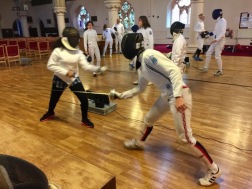 Last week 8SG, and this week 8T and 8S, visited the Design Museum for workshops on ‘unconventional design’. The workshop focused on objects that are not obvious as to their function upon first observation. The girls had the chance to design their own, and the results included ice hockey stick brooms, to try and encourage men to clean more (!), umbrella’s that clip onto broom handles for street cleaners and recycling bins that look like scrunched up paper balls.

After the workshop we had a look around the rest of the gallery and many of the girls chose to take part in an installation by ‘special projects’ where you were asked to enter into a conversation with a person over the age of 70. The piece was designed to break down the negative stereotypes of old age. the girls asked really considered questions and got a lot out of the experience. 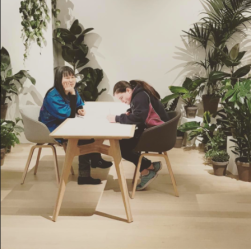 WE Day are an organisation the school has contacted to volunteer in the local community to help the less fortunate. A quarter of the school turned up to C22 before Christmas to hear 3 representatives talk about the organisation, its beginnings and how they help today. The girls seemed inspired and moved by the story of a 12 year old boy in Pakistan who had been taken from his family to work against his will in a carpet factory. When the boy spoke out to protest against child labour he was killed. A 12 year old Canadian boy called Craig read about the story and felt the need to set up the WE Charity to inspire young people around the world to raise awareness about important issues and to give up their time to help the less fortunate around the world.

Inspired by Craig’s urge to help, More House girls from Year 10 to Upper 6th have teamed up with WE Day to organise various volunteering events throughout 2017. When asked by the WE reps what they wanted to do, the girls asked the WE Charity to help them to help the elderly, the homeless and a local childrens’ hospital. Watch this space for more news!

On Tuesday the Year 9’s visited the Royal Geographical Society to meet the RGS Ambassadors and learn about current geographical topics and whether or not Geography could be a possible GCSE option. The Ambassadors commented to Mrs Mercer and Ms Tunnicliffe, on how engaged and interested the girls were during the sessions and it was lovely to see this tweet:

As you have no doubt seen in the press, schools’ performance data has been published. This year is the introduction of some new measures called Attainment 8 and Progress 8. As our girls take the IGCSE Maths course, our scores are not counted, as any IGCSE course is not recognised by these new measures. Therefore we either get a zero score overall or we are allocated a zero for Maths which will lower our overall score in Attainment 8. Also many of our girls do not take KS2 SATs and therefore we will score zero in the Progress 8 measure. As I have said before, there are more ways to judge a school from just reading a league table. Just read what we get up to every week!

Prayer from our Spirit and Truth Programme

Dear Lord, we understand that we will never fully know who you are, but we pray that with your help we will come to know who we are ourselves. Make us the best version of ourselves that we can be.  Amen.