This week has been filled with mixed emotions. We are grieved and shocked by the tragic events that took place in Westminster on Wednesday. Our thoughts and prayers are with the victims and their families during this difficult time. Such events can incite feelings of fear, confusion, anger, and grief in us all – but we will always do our utmost to protect the girls by listening to them and talking with them about these current issues.

Here are some highlights from the last week at school.

At More House, we are proud of the overwhelmingly generous fundraising spirit our staff and girls consistently display. Last week was a typical example: throughout the week we completed various sporting challenges and the grand finale on Friday had us running a sponsored mile in Hyde Park in fancy dress. Altogether, we were able to raise approximately £1,000 for Sport For Freedom.

One parent wrote in and said: “I enjoyed watching the Charity Fun Run on Friday. Good to see the girls embracing the St Patrick’s Day theme in their various shades of green. The event really summed up the More House ethos – whatever your goal, do it to the best of your ability and with enthusiasm.” We’re so glad staff, girls, and parents all enjoyed themselves! Year 7 girls returned from Hyde Park and remained at school for a pamper event which was a great success both as a fun social evening for the girls and for its fundraising initiative – girls are raising money for the More Green trip to the Amazon.

Thank you to our Year 11 and Sixth Form girls who worked hard to set up the top floor as a pizzeria and cinema so the girls felt at home! Games in the park were followed by crafts in the art room where the girls made animal masks of rainforest animals. Some great oeuvres were produced!

The pamper parlour was set up in the cosy art history room, where Monet and Degas were watching from the walls as hair was primped and nails painted with abstract and decorative glee! Following their pizza, the girls settled down to watch Parent Trap and relax with tuck shop treats for the rest of the evening.

The event was a fun bonding friendship evening for the year 7 girls and showed developing project management and leadership skills in our senior girls. Tonight is the turn for the Year 8s, while Year 9 will have their turn next Friday. The total amount raised from the three events will be published at the end of term. A big thank you to all who made it possible and to the staff for giving up their Friday night!

Further information about the Amazon and More Green project can be found here.

And no, we don’t mean the girls… We mean the 9 eggs that hatched this week! We had 10 eggs delivered on Monday. All cosy in their incubator, 9 out of 10 hatched between Wednesday and Friday!

The chicks are gorgeous and the girls are incredibly excited about the new arrivals – as are the staff! Here are some photos of our cute chicks. 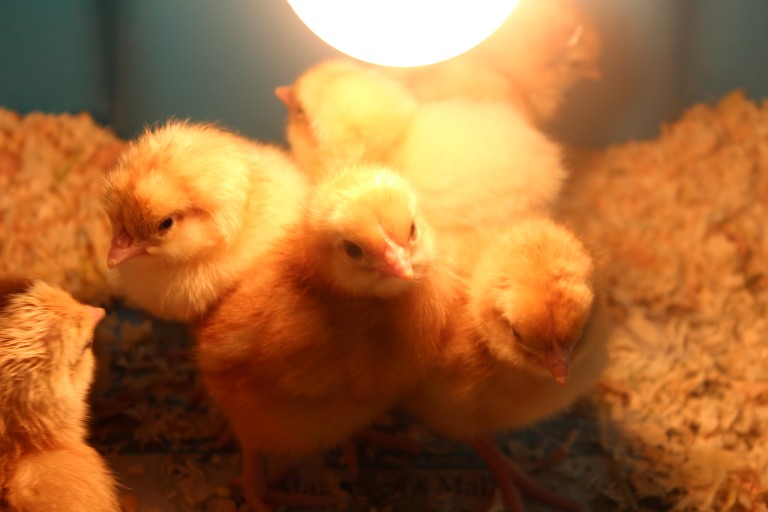 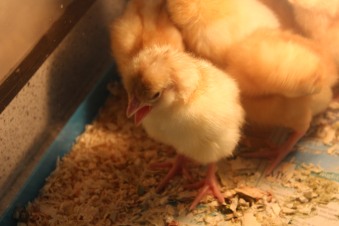 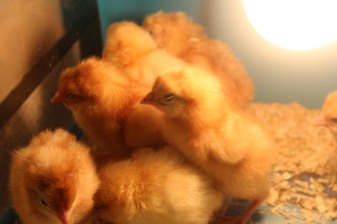 Miss Brown took some members of the U6th to Berlin last weekend to see some of the sights they have been learning about in class. Here is her report: 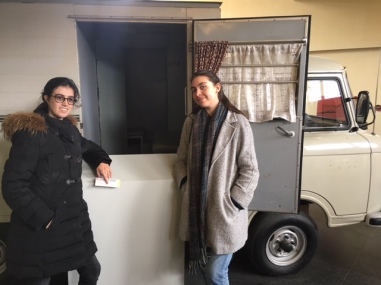 ‘On our first day we did a walking tour and visited different areas of the city, but our main focus was learning more about the history of the city. On a particularly cold and chilly day, we visited the disturbing Ex Stasi Prison Hohenschönhausen. The tour was very interesting and the interrogation cells where the prisoners were kept were particularly chilling. The weather added to the unsettling atmosphere. 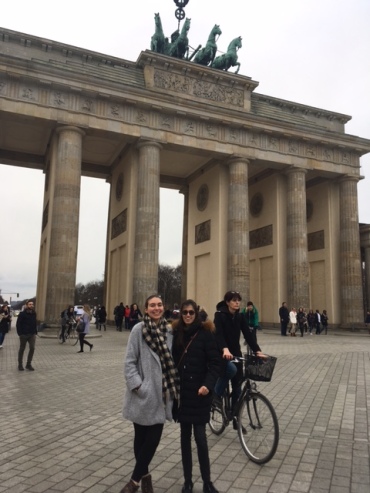 The girls are currently studying the film “Das Leben der Anderen” (The Lives of Others) and it was an excellent opportunity for them to see first hand where the East Germans were interrogated. We also went to the old Stasi Headquarters, where people can access the files kept on them between 1949-1989.

Further visits to the Film Museum and the Berlin Wall helped reinforce what the girls have been learning in class. It was a successful trip and a great opportunity for the U6th to practice their German before their A2 aural exam next week!’ 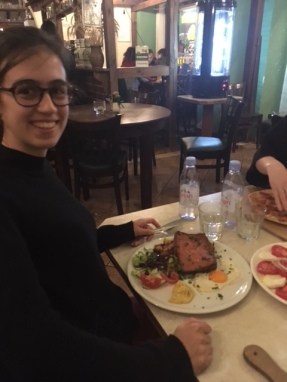 As part of the careers programme at school, the older girls have been signing up to help out in the local community through volunteer work. People from WE Charity have been organising work with local charities chosen by the girls that we will carry out in the next year. As a result, the girls were invited to attend the WE Day celebration at Wembley Arena on Wednesday which rewards 12,000 volunteers and launches the next year of volunteering. This is Mr Carrolls’ account of the day:

‘Upon our arrival at the Arena we were amazed to see so many people queuing up to get into the venue – and with such a high level of energy so early in the morning! Despite incredible performances from famous pop acts The Vamps, Conor Maynard, Fleur, and Jessie J, it was the messages from the inspirational speakers that were ringing in the girls ears as they got the tube back to school. 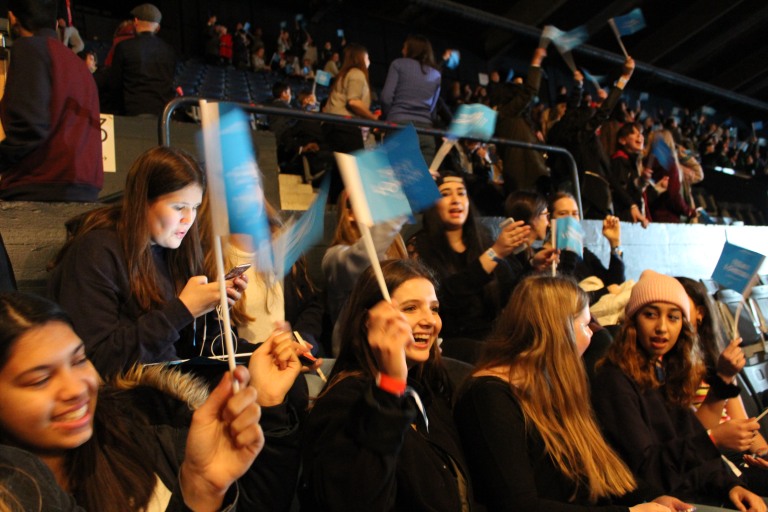 The issue of gender inequality was addressed multiple times throughout the day with inspirational teenage Syrian asylum seeker Muzoon telling us how she has been working with Malala to give every girl the right to an education in their own countries. The Malik sisters told us in their own words about the six world records they have broken to show how powerful women can be when they work together. “We climb to honour, highlight and empower women who are climbing their own mountains” was their message.

Other topics addressed were homelessness, bullying, the environment, war, and hunger. We had poetry from London’s very own Shakii, with his heart wrenching poem ‘My House in Aleppo’ about a Syrian refugee bullied at her new school in England, and Karl Lokko’s slam poetry gave the thousands of attendees goosebumps. 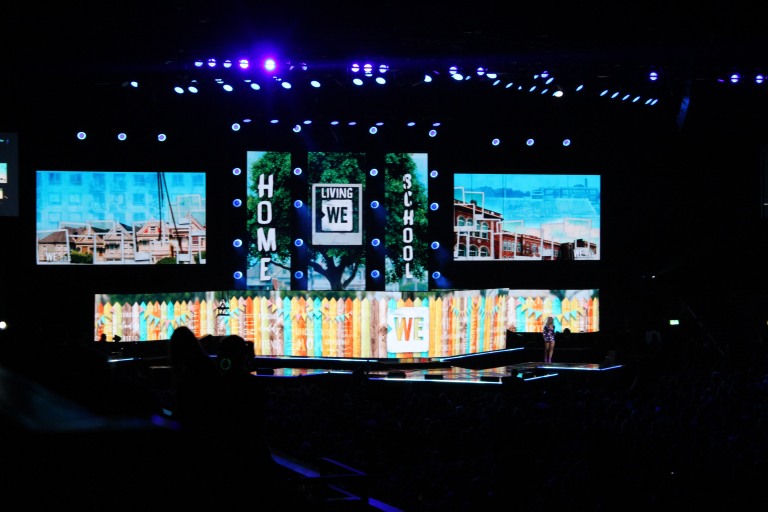 Perhaps the most inspiring, motivating, and humble speaker of the day was Kate, who used to work in a sandwich shop in Reading. You may know her better as Kate Winslet, Oscar Winner and A-List Hollywood Superstar. Kate spoke about how she was bullied at school because of her body image and how she was told throughout her career that she should “settle for fat girl parts.” Eventually, through her resilience, she was cast as Rose in Titanic, which became one of the most successful films of all time. She also spoke of the importance for young people to “put down their phones” and appreciate the people and environment around them. She asserted that she owes her success to her continuously growing passion and enthusiasm, and she also constantly poses the question “What could you do when you’re not on Social Media?” Her speech has already made the news and you can read more here.

The closing speakers of the day (who were also our opening speakers) were the Kielburger brothers who set up WE Day when they were much younger. They encouraged us to turn the world from thinking about ‘me’ to thinking about ‘WE’ when it comes to racism, homophobia, bullying, hunger, homelessness, and war. Their positivity and vision of people working together was infectious. 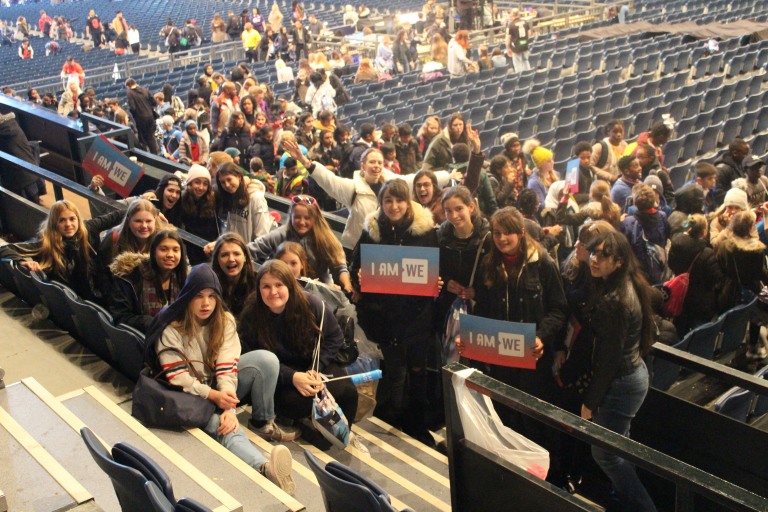 We’d expected to leave WE Day talking about the musical acts we had seen and the freebies we’d been given on arrival but it brought me a lot of pride to hear the girls talking about the speakers they had heard and their outstanding achievements. I think our feelings were best summed up by Manaal who said “I feel so motivated to go out and help now.” We look forward to beginning our volunteer work with WE Day and I personally want to thank them for inviting us to such an uplifting and moving event.’

“Let’s change our society of me into a society of we” – Craig, Founder of WE Day

‘On Wednesday we went to the Tate Modern to see Rauschenberg and to look at the origins of Modern Art that started the international rejection of Classical and Academic art.

Six decades of his work are displayed at this retrospective which demonstrates how this second generation American Abstract Expressionist experimented with styles and content to radically affect all American art that came after.

This landmark exhibition takes you on a tour of the senses…From paintings including flashing lights to a stuffed angora goat, Rauschenberg’s appetite for incorporating things he found in the streets of New York knew no limits. Pop art silkscreen paintings of Kennedy sit alongside 1000 gallons of bentonite mud bubbling to its own rhythm. Rauschenberg even made a drawing which was sent to the moon. 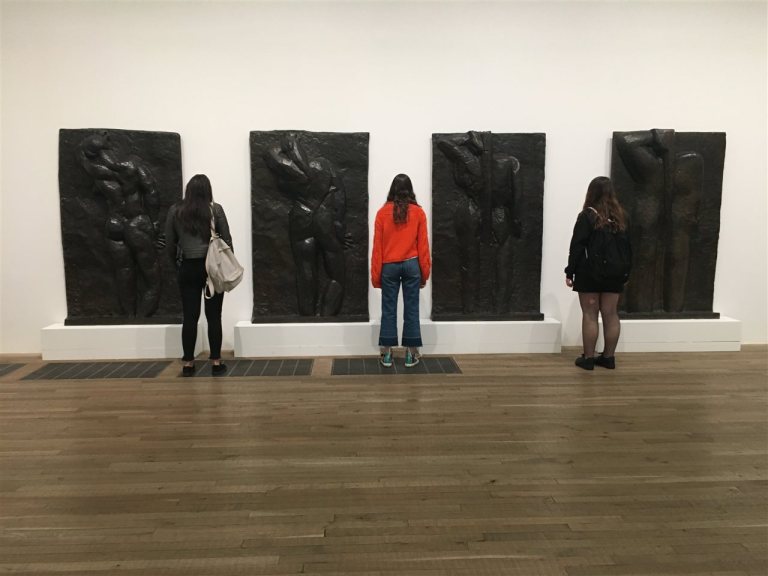 The diversity of work, styles, installations, and content includes personal abstract introspection and experimentation with techniques on topics from Dante’s inferno to political and social commentary on consumerism, expansionism, greed, equality, environment, and our expanding knowledge and capabilities.

We went on to look at the permanent displays in the Tate Modern to see how the greats of the early 20th Century took a fresh look at the everyday and re-defined not just how we see art, but what we see as art…’ 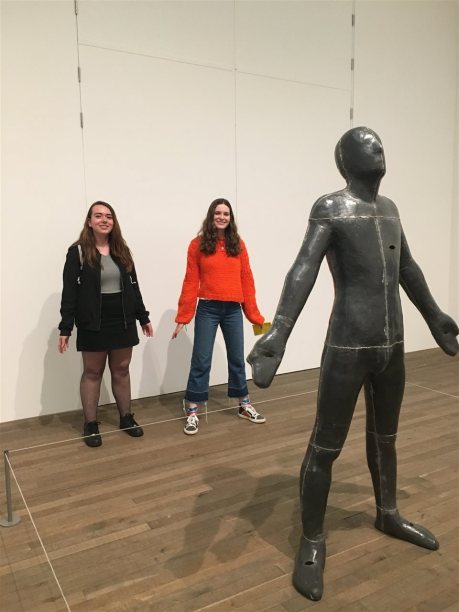 One final noteworthy mention this week – congratulations to Connie in Year 10 who was awarded a Bronze certificate in the UK Intermediate Mathematical Challenge 2017!

Here is a prayer taken from this week’s assembly by 9C. The girls based their assembly on Prejudice and Discrimination.

We pray for all those in our world who are suffering from injustice. Help us to fight against discrimination towards gender, disability, race and religion and to help those who are affected by the events on Wednesday at Westminster.

Help us to find forgiveness in our hearts so that love may rule and justice prevail to the benefit of all.